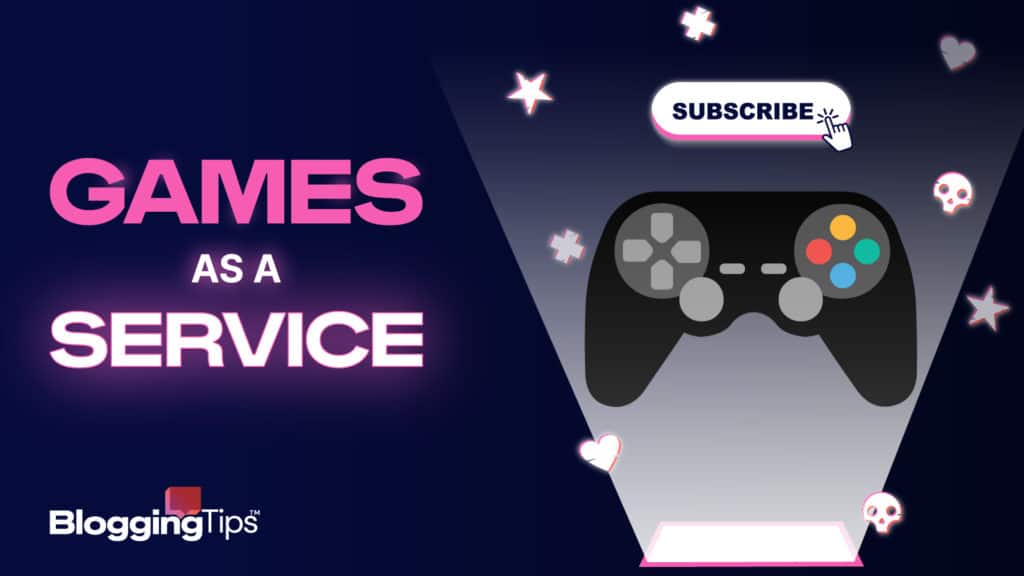 Games as a Service (GaaS) is a relatively new term used in the games industry to describe game titles and their economic approach.

The GaaS strategy also implements upgrades to its content, features, and functionality via regular updates.

The primary objective of the GaaS business model is to achieve a long-term strategy of regularly delivering value to users.

This article will discuss everything you need about Games as a Service, including its history, a general overview, and some of the industry’s top-rated games.

There are also various marketing lessons to learn from using this business model.

What Is Games as a Service (GaaS)?

Games as a Service is a relatively new profitable business model in the gaming industry which focuses on monetizing game content or video games.

It engages players by undergoing daily, weekly, or monthly updates.

Gaming video content is a fast-growing industry, generating immense revenue and luring players all across the globe.

Upgraded content is changing the land space of gaming by providing usability, accessibility, and an excellent player experience.

GaaS games are available to anyone since it is accessible from the cloud.

History of Games as a Service

The idea of GaaS games was introduced first as multiplayer online games such as World of Warcraft, released in 2004.

The subscription-based service increased revenue and influenced the publisher to create new content.

Later, the GaaS model expanded to mobile gaming, which included social elements to invite friends, and play with them.

Tencent, a Chinese company, was the first to monetize its products as a service to Chinese players.

They played on the phone rather than on consoles or computers.

The company published the service in 2008 and has become the largest video game publisher with the highest revenue stream.

Afterward, there were many other GaaS games released.

Many of these games used subscription fees and season passes or downloadable copies.

Today’s games that use the GaaS model are Apex Legends, Battle Pass, Rocket League, Destiny 2, World of Warcraft, and Fortnite, among others.

What Makes Games as a Service Unique?

The Games as a Service is unique since it is an innovative idea in the games industry.

Many industries use different GaaS models to monetize their products.

The free-to-play games use the GaaS model to monetize their product, maintain zero entry costs, and make it accessible.

This model is more extensive, customizable, and engaging.

The buy-to-play games use the GaaS model to make more money by using subscription fees and downloadable content.

What Is the Main Difference Between Traditional Video Games and Games as a Service?

Traditional games were single-sale products that you bought and played on consoles or computers at home.

So you paid only one fee and owned it forever.

GaaS is published once and updated regularly.

Typically, updates occur weekly and are based on subscription fees or in-game purchases.

The updates include elements such as new levels, missions, and events that keep the player engaged.

What Games Are Games as a Service?

You will find some of the most successful games listed below:

Fortnite is one of the most popular and successful Games as a Service, released by Epic Games in 2017.

In 2020, this game reached 350 million players that played over 3 billion hours in-game.

This game is the most popular freemium model, released in 2012 as a browser game and on mobile.

In 2014, the platform accounted for approximately 93 million players and about 2.7 billion downloads on mobile devices, and Candy Crush remains one of the most played mobile games.

You can play this game for free.

This game is the first GaaS to introduce the monthly subscription model.

It has the most active online community and, in 2020, has brought its creators $8 billion.

In 2019, Riot Games released League of Legends for the Windows and macOS platforms.

League of Legends is a free game to play.

In 2022, the monthly audience will reach 115 million players worldwide.

Later on, the riot games announced that the game would distribute free of charge over the Internet.

Seven years after its release, the League of legends became the most profitable PC game.

It is free to play, and the players don’t have to buy any elements.

Valve has included a monthly subscription called Dota plus.

The service helps beginners progress fast and well in the game with the primary skills.

Pokemon Go is a free-to-play game where players can buy different items which help them progress better in the game.

You use Pokecoins (an in-game currency) to purchase any items in the store.

Also, you can use Pokecoins to get extra space in the Pokemon storage or bag.

The more you play, the more space you get.

This is a browser and mobile game based on a free-to-play model.

It was developed by Q1 and released by Game Insight in 2011.

It is available on Facebook, a web version of ”Dragon of Eternity” for iOS and Android.

Bungie, an American company, developed the Destiny 2 in 2017.

This is a first-person shooter game.

You can play it with a PlayStation 4, Xbox One, and Microsoft Windows.

Bungie added new content and missions to the game, making it a popular game with around 31 million players in 2021.

Yes, it is a cloud-gaming service that operates on a subscription basis, and you can pay monthly or annually.

Yes, the Avengers is a single-player Game as a Service, and the user can pay for the upgraded characters.

However, rumors claim that the GaaS scheme turned the Marvel Avengers game into a flop.

How Does Games as a Service Work?

The GaaS model consists of various critical points which explain how it works.

Microtransactions are transactions of extra content in the game, such as items, maps, rewards, etc.

The primary focus of this business model is to help the players to improve their progress.

Depending on the type of game, the GaaS should update regularly and come with a new exciting mission or features.

Building a community of socially active players is a valuable asset of any game.

An integral part of GaaS is developers’ continuous support of players.

Automated responses are an excellent way to speed up the answering time.

If the number of players grows, you can try user segmentation.

To ensure the high performance of the game, you should know well how to optimize the game.

Keep it SEO friendly, buy traffic every year, reach out to influencers, etc.

Pros and Cons of GaaS Platform

Developing, Maintaining, and supporting Games-as-a-service has many advantages and disadvantages.

Games as a Service Business Models (and How To Monetize)

Selling in-game content is a business model where the players pay a low fee for a quick transaction.

You can purchase items or unlock new levels.

You might have to pay a small price to access a new feature; this transition is ”in-game purchases”.

In pay-to-play games, the customers pay to access it, own a physical copy of the game, and play it.

It is ideal to use pay-to-play for certain games, such as WoW (World of Warcraft) until you reach a fixed level.

In this situation, it is best to identify if the game interests you.

If it does, you can subscribe monthly by paying a fee.

Since many players are part of GaaS, its market is enormous, and the potential to place your ad is expansive.

Many developers show their ads as videos on loading screens to increase brand awareness and revenue.

Adding new content is a way to increase the in-game revenue.

For instance, Fortnite regularly comes out with new content to keep players active and maintain its monetization.

Game bundles are a collection of high-value titles in one package.

The users can purchase them at a discount price.

They are a great way to engage new users and generate new leads on an existing, less popular products.

Cloud gaming services operate on a subscription basis which is either monthly or annually.

The included games are hosted in the cloud, and the users don’t have to pay individually for each game.

What Can Marketers Learn With the Games as a Service Model?

Marketers try to find ways to convert the new clients into loyal ones.

Microtransactions help the customer pay a low fee in a quick transaction to buy the preferred equipment, feature, or level.

This strategy keeps them engaged and interested in playing.

Advertising is a perfect way to present your game in an engaging, appealing, and catchy way.

Marketers can better understand how to analyze the strategic points for a successful ad by optimizing ad placement, formatting, and timing.

The GaaS model offers gamers a recurring subscription service, which is free (free-to-play).

GaaS has many billing options such as based, flat, and tiered billing.

They allow game designers to iterate on their product and create a more targeted experience when they need it.

The main focus is providing quality content without compromising quality or time management.

These games have the potential to be profitable in the long term due to their sustainable nature.

They offer new opportunities for game developers of all sizes and skill levels.

A happy new era of gaming!